The most recent innovations in prosthetics aren’t coming from advances in manufacturing methods, but rather advances in technologies connecting the prosthetic directly to the user’s brain.

Last year at the University of Pittsburgh Medical Center, a research team used fMRI’s (real-time brain scanning) to create a personalised map of a patient’s motor cortex. The team then implanted two microelectrodes into the patient’s left motor cortex where hand control is processed. The electrodes were then connected to the user’s robotic hand, and the data was processed through an algorithm. 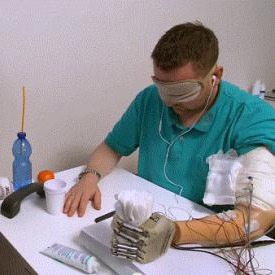 Dennis Aabo Sørensen trials the arm. He’s the first amputee in the world to experience sensory-rich information in real-time. The prosthetic hand is wired to nerves in his upper arm. Whilst blindolded, Sørensen was able to grasp objects intuitively and identify what he was touching.

The secret to the success of this procedure is in the algorithm. Being able to accurately interpret the brain’s thoughts and desires via a computer has been the trickiest part for these scientists.

More recently, researchers at the Swiss Federal Institute in Lausanne have been implementing and improving prosthetics that give the user the sensation of feeling the object that they are holding. This is achieved by implanting a series of electrodes into the two major nerve bundles of the test subject’s upper left arm. These nerves control motor function, but also send sensory feedback to the brain, which is crucial for communicating with the prosthetic. A month after the sensors are implanted, the user is outfitted with a prosthetic hand full of sensors. The user can then start to manipulate objects with the prosthetic, and data is interpreted by a computer algorithm in real time and sent to their nervous system. The patient is able to feel if an object is soft or hard, and whether it has corners or curves. This feedback is crucial because without it, the user is not able to move their prosthetic as smoothly as a natural limb.

This type of control is not limited to amputees, but also to those who are paralyzed. Experts in a variety of different research labs are getting closer and closer to allowing the wearer of a prosthetic to control its movement as though it’s one of their own limbs.

Meshless CAD Simulation – a new alternative to FEA
Factors affecting the Fatigue Performance of Helically Wound Springs
Skip to toolbar
By using this website you agree to our Cookies usage and Data Transfer in and outside of the EU. We and our partners operate globally and use cookies, including for analytics, personalisation, ads and Newsletters: Find out more.