British military engineering at its best: The Bouncing Bomb

During World War II the Allies were struggling to penetrate the heartland of industrial Germany where weapons were being manufactured. It is well documented that Hitler saw the dam walls protecting the vital area of Ruhr as impenetrable but one British military engineer by the name of Sir Barnes Wallis saw this as a potential weakness. This area of Germany had been the target of the British forces since 1938 but by 1940 they were forced to review their tactics. So, as the authorities turned to Sir Barnes Wallis little did they know that he was about to unleash a historic type of bomb the like of which the world had never seen before.

Wellington bomber to the bouncing bomb

It is not common knowledge but Sir Barnes Wallis designed the highly effective Wellington bomber prior to his top-secret mission to blow part the “impenetrable” dam walls protecting the Ruhr. It is easy to forget that these structures were designed to hold back millions of tonnes of water and an array of protective netting under the surface ensured that any torpedoes would never hit their target. So, there was only one option, to create a bomb which would bounce along the surface of the water, maintain its stability along the way and then eventually hit the dam wall, sink below the surface and blow apart the dam walls at their weakest point. Sound simple?

The idea of the bouncing bomb

There is much mystery and intrigue surrounding the way in which the so-called bouncing bomb came to be. An innocent game of “ducks and drakes” which many of us now refer to as “skimming” saw the ingenious engineer come up with a brainwave. By spinning stones across the top of the water he was able to extend their journey by “9 to 11 hops” at which point they stopped and sunk. Key to this extended journey of the skimming stones was the spinning affect introduced when throwing them across the water. So, would it be possible to create a bomb which would effectively skim across the water like a stone, remain stable and ultimately come to a standstill, drop under the surface and blow apart the dam walls?

While March 1942 was the month that Sir Barnes Wallis went “skimming” with his family little did he know that that his “out-of-the-box thinking” would quite literally change the direction of World War II. In April 1942 he set up a test to see whether a round object could be skimmed across the water much like the flat skimming stones. A catapult and a bag of marbles set in motion one of the most innovative ideas for centuries. History shows us that many top brass in the British Army thought his idea was nonsensical and bound for certain failure.

Against all the odds Sir Barnes Wallis brought together his engineering skills, his knowledge of science and his ability to push forward while many doubted him. After nearly 3 years of thinking, designing and testing, the infamous bouncing bomb was given the go-ahead on 26 February 1943. Reconnaissance and knowledge of the area allowed the Allies to project when the dam walls would be at their fullest leaving just 11 weeks to create, perfect and drop the bouncing bombs. 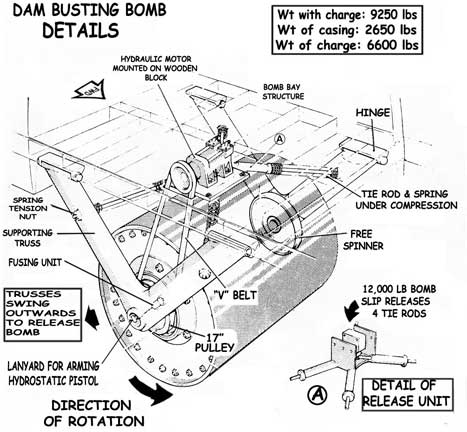 The structure of the bouncing bomb

Also known as the “upkeep mine” each bouncing bomb weighed 4.2 tonnes and was fitted to an array of redesigned Lancaster bombers which themselves weighed 30 tons. The bombs were held in the undercarriage of the modified planes via carrying arms designed to open up and release them onto the water. However, while the design and the structure of the bouncing bomb still attracts much intrigue today it is the electric motor connected to each bouncing bomb which was critical to their success.

Testing, testing and testing again led Sir Barnes Wallis to perfect the drop, the speed and the trajectory but also to introduce backspin to the bombs. The backspin motor was activated 10 minutes before the drop area spinning the bombs anticlockwise at up to 500 revs per minute. This was vital because as the bombs were dropped 389 metres from the dam face, from a height of just 60 feet, at 230 mph and a 10° angle (a precise calculation) the backspin immediately came into play.

Initially the backspin would stabilise the bouncing bombs each time they hit the water but critically the forward momentum and the backspin created a water surge ahead of the bombs in the shape of a ramp. This meant that the bouncing bombs would hit the water and then immediately climb the ramp ahead of them leaping into the air and back down again. Due to the precise testing of the bouncing bombs Sir Barnes Wallis knew exactly when to drop them, how many times they would hit the water and vitally, when they would hit the dam wall and sink. Like a depth charge the bombs hit the dam walls, fell to a depth of 30ft at which point, as programmed, they detonated. All of the months and months of testing, the ridicule and the dedication of the whole team ended in perfection.

Once described as foolish and “tripe of the wildest description” that fateful day when the bouncing bombs were dropped thrust a dagger into the heartland of the German war machine. The bombs obliterated the dam walls which had for so long protected munition factories and other key operations of the German authorities. From that day “skimming stones” with the family Sir Barnes Wallis followed through with his ground breaking idea, weakening the German war machine in the process and greatly assisting the success of the Allies.

The downside of the bouncing bombs

The death and destruction which arrived at the Ruhr on that fateful day took everybody by surprise except Sir Barnes Wallis and his team. It is well documented that various elements of the team who created different components were initially unaware of what they were building. Unfortunately the man himself was devastated at the loss of life amongst those British brave pilots and servicemen that dropped the bombs. While they will all go down in history as heroes, Sir Barnes Wallis struggled to live with the guilt of this excessive loss of life despite the fact they saved millions of lives.

Sir Barnes Wallis went on to create an array of other engineering masterpieces such as bridges, the radio telescope and a jet powered submarine to name but a few. However, the British people and the Allied forces around the world will forever be in his debt.

5 thoughts on “British military engineering at its best: The Bouncing Bomb”