What is worse than a bad design? A crap design that stays around for fifteen years over a wide variety of updates, upgrades, and changes. USB plugs have been a thorn in the side of consumers for years and while we have seen many updates, our pain remains. How do we plug these things in correctly? The designers should have been listening to some of our suggestions to avoid

If you think about what is at the bottom of your desk drawer, most people have piles of old USB cables from different standards, speeds, shapes, and sizes. The Mini-USB cords which charged most phones 10 years ago are collecting dust today, while the current Micro-USB and lightning cables are beginning to be phased out in place of USB-C. It is not unusual to expect to need different cables over time, though the constant development of smartphone technology has caused the rapid adoption and improvements of different types of cables. In this article, we will review a few of the design choices of the USB and how those have affected us every day.

The Universal Serial Bus (USB) connector was created in the mid-1990’s and was rapidly adopted as the most popular connector cable for almost all computer accessories. The USB connector replaced a wide variety of ports such as serial ports, the PS2 ports for mice and keyboards, and parallel ports for printers. It is now one of the most widely used interface ports in the world used with; power transfer, storage drives, input devices like mice and keyboards, and even display outputs. Now, this one type of port has replaced a dozen different types of plugs and ports that were previously used.

One strong feature is the compatibility between versions, as the interface and hardware have been upgraded all the way up to version 3.1, the cables and connectors have not changed drastically and a USB 3.1 port will be compatible with a 1.0 cable and vice versa. The USB standard spread quickly, was widely adopted, and is incredibly versatile, however, its design is not without fault.

From the beginning, the USB cord had a major issue, the plug itself. Theoretically, there are supposed to be identifying markings on the cable that identifies which direction is up, but what happens if the port is turned vertically? One of the USB’s major weaknesses comes from its rectangular design, there is no easy identifiable way to identify what the correct orientation is. An example of a better design is the Displayport, while it has a similar shape, there is a unique identifying notch on the side that helps you identify the correct orientation.

The biggest issue with the USB and its many iterations are the asymmetric designs. Cables that are used every day should be incredibly easy to identify the correct orientation and then very easy to plug in.

The Ugly – An Ugly Mess of USB Plugs

The hardest part, is there are about a dozen other different USB end connections that have been released and shortly retired. Making it very difficult to know what cable you are holding sometimes.

Now amongst this mess of different wires is another issue, while the end connectors are standard, the capacity of the cables can vary from manufacturer, you can buy a cable and it won’t charge your phone, or you can buy a cable and it could destroy your phone (though unlikely as it is). If a cable has a much lower amperage than your device requires it could spell disappointment when you plug them it in only to see it not charge. Asking the end users to keep track of what specific amperage their phones require is difficult, thankfully most cables and plugs now are being sold at higher amperage ratings to handle the bigger batteries and quicker charging. It is advised to look up the charging requirements of your specific devices and try to match them, but never a bad idea to test any cable you buy to see what amperage it actually delivers.

Several companies have released their own versions of a reversible USB plug (e.g. the MicFlip), the major issue here is you will now need their proprietary reversible cables and ports. But the new standards are making headway, while Apple’s Lightning Cable was praised for its reversibility and ease of use, however, it was Apple’s proprietary standard so we would never see it show up on a Samsung phone. The new Type-C USB cables are a full overhaul to the old connections, being fully reversible and about a third of the size, the only issue is it isn’t backward compatible with the old Type-A port without an adapter. Some newer computers are already implementing both Type A and C ports on their sides!

In any case, the USB plugs we know so well aren’t going away anytime soon. With all of the different varieties and standards it will take a long time before any new technology can fully replace them, so we can safely say that these standards will be around for a long time.

1 thought on “Crap Design: The USB” 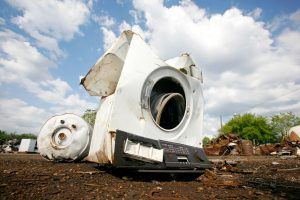