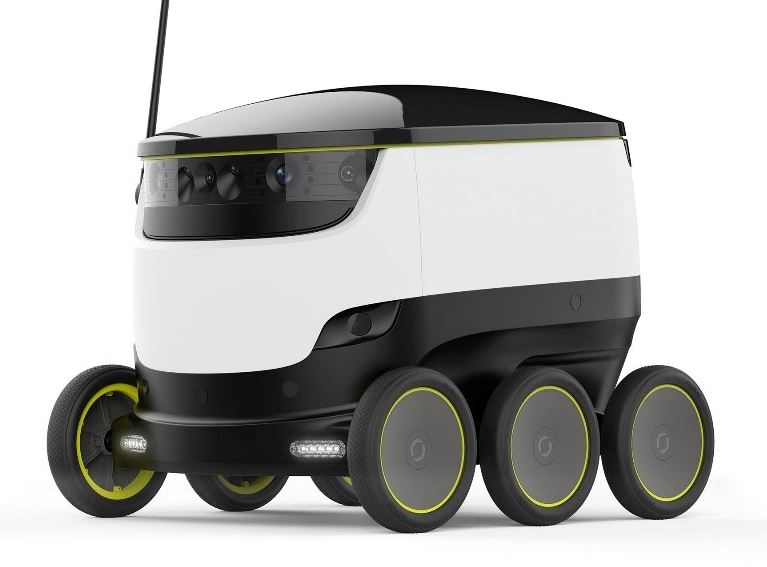 Your delivery man might soon be a cutting-edge intelligent robot trundling down the street on six-wheels.

In early 2015 Starship Technologies launched an autonomous delivery robot, designed to deliver groceries and goods to consumers in Greenwich, London at the cost of only £1 per delivery. These all-electric robots are capable of traversing urban environments, including roads and sidewalks, much like a pedestrian. The delivery robots can make deliveries up to a 3 mile radius, with estimated delivery times from 5 to 30 minutes.

These technologies could be considered a disruptive innovation, when compared to current delivery methods. As Ahti Heinla, the CEO of Starship Technologies, said in a press release,

Our robots are a totally new class of devices that will provide a combination of low cost and convenience with less congested streets and zero emissions.

The goal of these lightweight robots is to bring current delivery costs down fifteen fold, in comparison to the current conventional method of cars or trucks. These robots were designed to utilize sidewalks as their roads, by integrating a combination of sensors and cameras they are able to navigate an area with pedestrian traffic. These robots are primarily driven autonomously, however they are monitored by human controllers who can take over the control remotely at any time.

Over the next six months, Starship Technologies has scheduled these robots to be visiting towns and cities in all across the United Kingdom. This public introduction program aims to demonstrate how easily the friendly curb-side robots can integrate into human life. Upon completion of this test, Starship Technologies plans to launch a full pilot of this delivery service later this year.

The initial response to the project has been quite positive. Ahti Heinla, CEO of Starship, commented,

The robot has been in development for almost two years, and we’ve experienced unprecedented levels of interest and goodwill – so it’s great to now be taking the first step to rolling our little robot out for real. The robot has been very well-received by pedestrians in all of the interactions we’ve seen so far, so it’s very exciting to be officially introducing the robot to the British public.

Starship Technologies, was launched by two of Skype’s co-founders, Ahti Heinla and Janus Friis. Their plan is to change how good are shipped and delivered. At this moment there is a plan to start testing these delivery robots in the United States, as early as this April.

Curtis Obert EIT, MEM is a graduate of Case Western Reserve University, with a passion for design and process improvements. He was first a Polymer Engineer who loves understanding how engineering and people management works into the business as a whole. He spends his free time hiking, cooking, and restoring antique firearms.
View all posts by Curtis Obert »

Supersonic Travel – the revival?
5 Celebrities Who Would Be Excellent Mechanical Design Engineers
By using this website you agree to our Cookies usage and Data Transfer in and outside of the EU. We and our partners operate globally and use cookies, including for analytics, personalisation, ads and Newsletters: Find out more.