In this article we will analyze and explain the collapse of part of a football stadium – the Twente football club stadium. This occurred in Holland in 2011. As ten construction workers were killed in this disaster, it was obviously a serious event with lessons that should be learned and applied to similar situations in the future.

In the image below you can see the main load-bearing construction. It consisted of I-beams held up with other steel construction elements, connected by a web of steel cables. The roof collapsed when workers laid steel plates (the roof panels) on top of the I-beams. 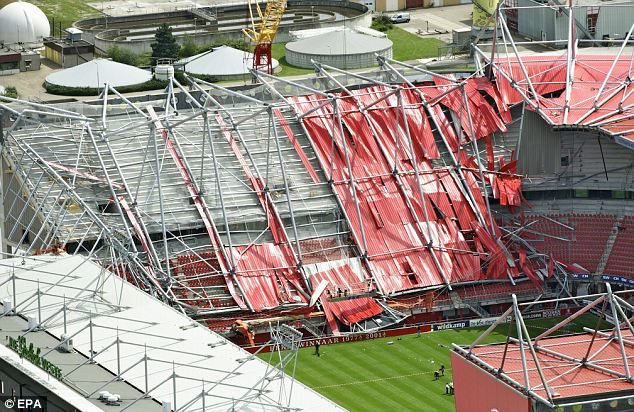 The location of the roof panels had an effect on the stability of the structure. When these roof plates were positioned at the end where the cross of steel cables stops, this caused a problem. Due to the weight of the roof panels, the I-beams bent downwards. The steel cables were stiff and could not elongate. This meant that the I-beam could not only bend downwards but would also be pulled in a horizontal plane.

This created torsion in the I-beams that were positioned in the vertical plane. I-beams are not designed to take torsion. This is why it collapsed. If the roof panels were placed in the middle where all the steel cables were connected, they would have been fully supported with all I-beams distributing the load. But, when the roof panels were placed at the end of the steel cables, the construction collapsed.

This accident was due partly to the fact that the Dutch government decided that a head of construction is not required when building such structures. If there was a head of construction, he likely would have pointed out that putting a weight on the roof was only allowed when all steel cables were mounted and tensioned, making the construction more stable.

Please also take a look at practicalsolution.eu they specialize in applied research and development for sustainable technologies, in the hopes to provide new clever solutions for solving real-world problems. 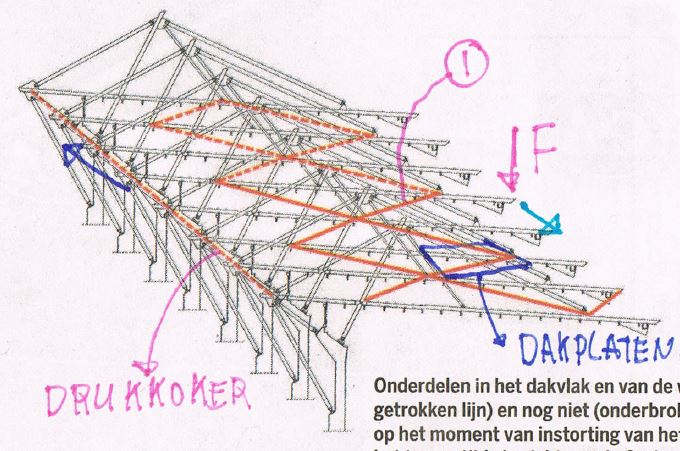 Studied Aerodynamics at TU Delft, all about optimising construction for weight reduction. For over 25 years, I have offered comprehensive, holistic solutions that incorporate all aspects of systems design, including predicting and pinpointing potential shortcomings or weaknesses. Sailing, wintersport, fishing
View all posts by Erik van Vliet »

Materials Spotlight – Graphene
Managing Automation Intelligence
By using this website you agree to our Cookies usage and Data Transfer in and outside of the EU. We and our partners operate globally and use cookies, including for analytics, personalisation, ads and Newsletters: Find out more.