The best example of a beam bridge is one you will see on a country walk consisting of planks of wood and slabs of stone. However, some of the beam bridges around the world have taken this to a different level. 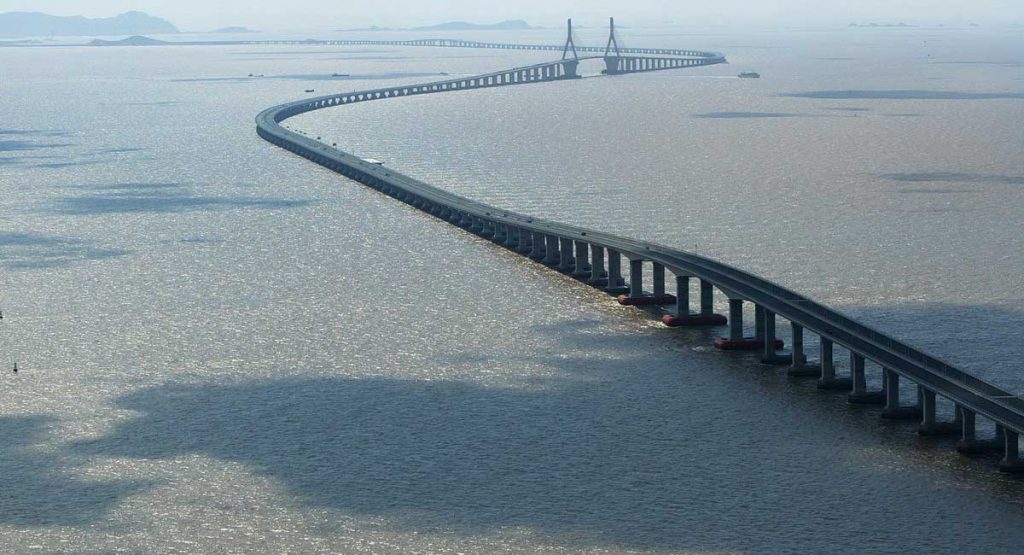 Situated in China, the Donghai Bridge is one of the longest sea bridges in the world measuring 32.5 km (20.2 miles). The beam bridge connects mainland Shanghai to offshore Yangshan with a cable stayed section in the middle allowing the passage of large ships. The bridge was completed back in December 2005 and is said to have cost $1.64 billion.

The King Fahd Causeway is actually a series of bridges and causeways connecting Saudi Arabia to Bahrain. The project started in 1968, construction began in 1981 and it was finished and opened in 1986. The project is said to have cost around $800 million with the causeways used by 25,000 vehicles each day to ferry an average of 52,000 passengers.

The truss bridge load-bearing design is the oldest with a history which goes back centuries. The structure involves a number of triangular sections which are connected in such a way as to spread any tension/compression right across the structure. The Tokyo Gate Bridge is described as a mix of truss and cantilever design which is high enough to allow ships to pass under but low enough as not to interfere with nearby airport traffic. Construction began in 2002 with a slightly delayed finish of 2012 and a cost of $1.5 billion. Crossing the Bay of Tokyo, this bridge is a sight to behold.

Completed back in 1991, the Ikitsuki Bridge is the world’s longest continuous truss bridge. It has effectively joined Ikitsuki with mainland Japan, introducing private and public transport where historically ferry travel was the only option. The estimated cost was anything up to $200 million with no official costings available.

The cantilever bridge design involves cantilevers which can be just simple beams or trusses. The cantilever arms each side of the bridge are joined in the middle by a centrepiece which is known as the “suspended span”. Engineering at its finest!

The Forth Bridge (not to be confused with the Forth Road Bridge) is a railway bridge created around the cantilever design and spanning the Firth of Forth. Construction began back in 1882 and finished in 1890. The structure spans the villages of South Queensferry and North Queensferry with a total length of 2467 m. The cost back in 1882 was estimated at around £3.2 million.

The original (above) and final (below) designs of the Forth Bridge

There are many famous bridges in India and the cantilever style Howrah Bridge is one of the best known. It spans the Hooghly Rive in West Bengal, India with construction starting in 1936 and ending in 1942. It is estimated to serve 100,000 vehicles each day and around 150,000 pedestrians.

Despite the fact that the Quebec Bridge project failed twice, killing 88 people, the authorities persevered although it did take 30 years to finish. The bridge was eventually completed in August 1919 at a cost of around $22 million (the equivalent of $350 million in 2018). This is a fairly complicated structure taking in a road, rail and pedestrian bridge between Sainte-Foy and Levis, Québec, Canada 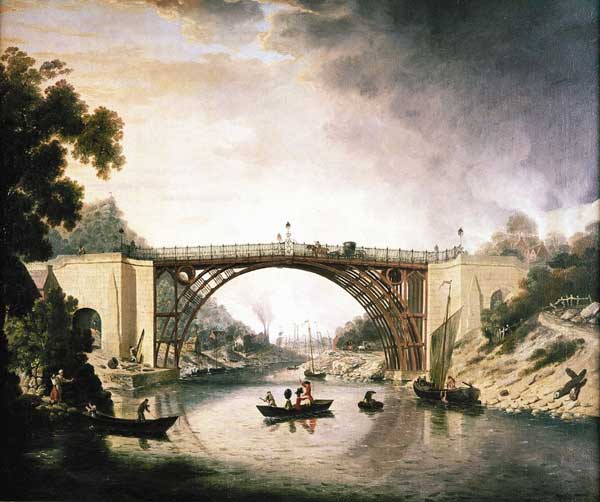 Arch style bridges are one of the more common, incorporating abutments which support a curved structure under the bridge. This design is traditionally used when building viaducts and is extremely good at transferring lateral pressure to the supporting abutments.

The Iron Bridge in Shropshire, England, was the first major bridge in the world to use cast iron. Construction began back in 1777 with the bridge open for traffic on 1 January 1781. The bridge is now closed to traffic, but not pedestrians, and is now something of a tourist attraction after gaining heritage status.

The Rialto Bridge is one of the most famous bridges in Venice spanning the Grand Canal. It was originally built as a pontoon bridge in the 12th century although it has since been rebuilt several times. The bridge itself only spans 31.8 m (104.3 feet) although in its current form it has a history which goes back to 1588.

It is fair to say that the Charles Bridge, which crosses the Vltava River in Prague, is a sight to behold. Construction began back in 1357 and was completed in 1402 creating what was for many years the only connection between Prague Castle and the “old town”. The bridge is scheduled for extensive repair work in 2019 which could take up to 20 years to complete.

Construction of the Bridge of Sighs is said to have begun in 1600 with the project finished in 1603. Located in Venice, northern Italy, the bridge connected the new prison to the historic interrogation rooms in the Doge’s Palace. Like so many of Venice’s outstanding bridges, it is steeped in history. 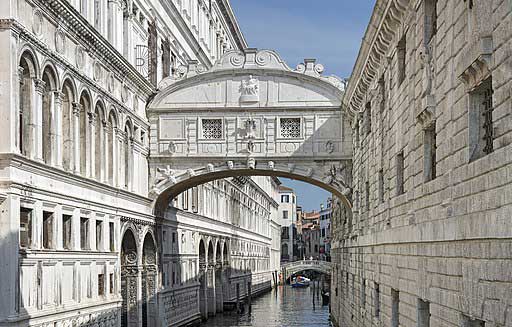 Referred to as the Ponte Vecchio Bridge, it is sometimes known as the Old Bridge, and has a history which goes back to 996. Originally constructed by the Romans, it was destroyed in 1117 by floods, swept away in 1313 and rebuilt in 1345. It is iconic, eye-catching and despite various challenges, has stood the test of time. 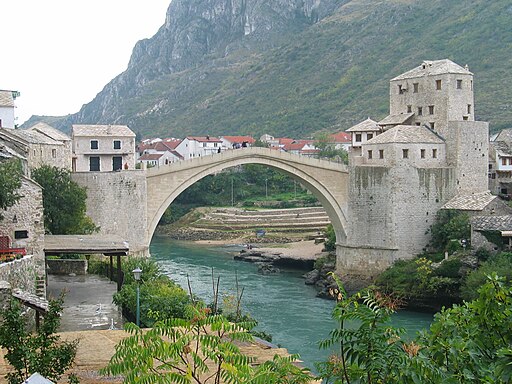 The Stari Most Bridge has a history which goes back to the 16th century in the city of Mostar, Bosnia and Herzegovina. While the original bridge stood for more than 400 years it was destroyed back in 1993 during military action with the Croat army. Rebuilt and redesigned the new bridge was opened on 23 July 2014.

The tied arch bridge design is a very eye-catching design incorporating an arch structure above the deck of the bridge. There are many examples of tied arch bridges around the world which include:-

The Dragon Bridge, Vietnam, has to be one of the most breathtaking examples of a tied arch bridge. Stretching over the river Han at Da Nang, Vietnam, it incorporates the design of a dragon. Construction of the bridge began in July 2009. It was eventually completed and opened to traffic in March 2013. It has a total span of 666 m and it is no surprise it is now a tourist attraction in its own right.

No list of famous bridges would be complete without Australia’s Sydney Harbour Bridge which is a prime example of a tied arch design. Stretching across Sydney Harbour it connects the central business district with the North Shore. Construction originally began back in 1923 and the bridge was completed and opened to the public in 1932. There are fewer more iconic bridges in the world than the Sydney Harbour Bridge.

Originally named the Harbor Bridge, the Daniel Hoan Memorial Bridge is a tiered arch design connecting Interstate 794 to downtown Milwaukee. The bridge has a total length of 3057.8 m and while construction began back in 1970 it was not finished until 1977 due to political issues in the region. It will be forever remembered as the location for the infamous “The Blues Brothers” car chase scene.

There is no doubt that suspension bridges tend to grab the headlines because of the style and way they look. Unlike other bridge designs the load-bearing section is actually the deck of the bridge.

Spanning 1 mile across the strait which connects San Francisco Bay and the Pacific Ocean, the Golden Gate Bridge is one of the most iconic bridges in the world. At the time of completion back in 1937 it was not only the tallest suspension bridge but also the longest in the world. The equivalent cost today is around $1.5 billion but this is certainly money well spent.

Panorama showing the height, depth, and length of the span from end to end, looking west. Image credit Spanning the Avon Gorge, and the River Avon, the Clifton Suspension Bridge links Clifton in Bristol to Leigh Woods in North Somerset. Open back in 1864 the tolls gathered on the bridge have contributed to maintenance costs. The original idea was discussed as far back as 1753 although it took more than a hundred years for the suspension bridge to eventually get built.

Crossing the busy Akashi Strait the Akashi Kaikyō Bridge joins city of Kobe in Japan with Honshu. Construction began in 1988 and was completed in 1998 at a cost of around $3.6 billion. There are six lanes for public traffic and four emergency lanes. The bridge has the longest central span of any suspension bridge in the world.

Spanning Chesapeake Bay in the Maryland state of the USA, the Chesapeake Bay Bridge is now an integral part of the local transport network. Originally opened back in 1952 the bridge is 4.3 miles in length. It is also the world’s “longest continuous overwater steel structure”. The bridge has become a victim of its own success with enormous annual traffic and regular traffic congestion.

Described as a combined bascule and suspension bridge design, London Tower Bridge is one of the most famous bridges in England. Construction began back in 1886 and it took just eight years to complete. While 11,000 tonnes of steel provide a visible framework, two massive piers containing more than 70,000 tonnes of concrete were sunk into the Thames river bed.

Referred to as the Jiaxing-Shaoxing Sea Bridge or Jiashao Bridge this structure is the longest and widest multi pylon cable stayed bridge in the world. It is supported by six pylons, each 745 feet in length, and the bridge can accommodate eight lanes of traffic. The total length is 10,138 m with construction starting in December 2008 and finishing in June 2013. The Jiaxing-Shaoxing Sea Bridge cost a total of $2.23 billion.

Many would be surprised to learn that the Millau Viaduct was the result of an Anglo-French partnership. Spanning the Gorge Valley over the River Tarn, near Millau, it is officially the tallest bridge in the world. Construction began back in October 2001 with the bridge opened in December 2004 at a cost of €394 million. This is one of the more famous bridges in the world. 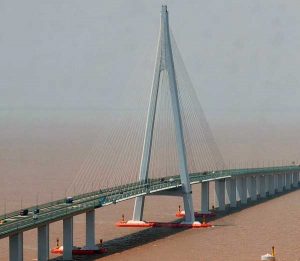 Carrying six lanes of traffic, the Hangzhou Bay Bridge connects Jiaxing and Ningbo in the Zhejiang province of China. Construction began in June 2003 and the bridge was completed in June 2007 although not officially opened until May 2008. The total length of the bridge is 22 miles reducing travelling time between the two regions from four hours down to 2 hours.

Last but not least, we have one of the most famous bridges in New York, the Brooklyn Bridge. Connecting the boroughs of Manhattan and Brooklyn, and spanning the East River, the bridge was designated a National Historic Landmark in 1964. Originally built to carry horse-drawn vehicles and elevated railway lines it is closed to commercial traffic. It now caters for private vehicles, pedestrians and cycle traffic. As recently as 2016, the official transport figures showed a staggering 120,000 vehicles using the bridge each day. As well as 4000 pedestrians and 2600 cyclists – what more can you say?

Comparison of elevations of some notable bridges to scale

This image compares elevations of some notable bridges to scale, centred on (one of) their largest spans with an Airbus A380 and RMS Titanic. To see an interactive version of the file, please click here.

The 7 Types of Bridges

AutoCAD vs. SolidWorks
Kinematic Viscosity
By using this website you agree to our Cookies usage and Data Transfer in and outside of the EU. We and our partners operate globally and use cookies, including for analytics, personalisation, ads and Newsletters: Find out more.