Do you know that many ancient Greek inventions are still used to this very day? Some of them will suprrise you. It is common knowledge that the Ancient Greeks produced some of the greatest architecture known to man. Examples of their style of tall columns, triangular pediments, symmetrical shapes and domed roofs can be seen around the world. However, some of the products that the Greeks invented may not be so well known. Let’s take a look at some of the unbelievable Greek inventions that shaped the world that we now!

The winch was developed by an ancient Greek historia that went by the name of Herodotus. The first designs were made out of wood, and were used to tighten pontoon bridge cables that went over the Hellespont in the middle of the Persian Wars. Aristotle stated that winch and pulley hoists had become quite common. Ancient Greeks used the functionality of these new useful tools in their construction of temples and other structures. It allowed them to efficiently move building materials quicker and easier than before. Sure beats lifting the heavy stones by hand!

One of the most famous Green Inventors, Archimedes is credited with inventing this device. Although he did not create the device itself, he did write about the mathematical principles behind how it works, and therefore it was named after him.

The purpose of his creation was to bring water to irrigation ditches, by way of a screw mechanism. This concept is still in use today, a helical surface within a hollow pipe, which is powered either by cattle, a windmill, an unlucky man tasked with powering it, or a motor. One the shaft turns, it carries water up the pipe and pushes it out of the top, handy! 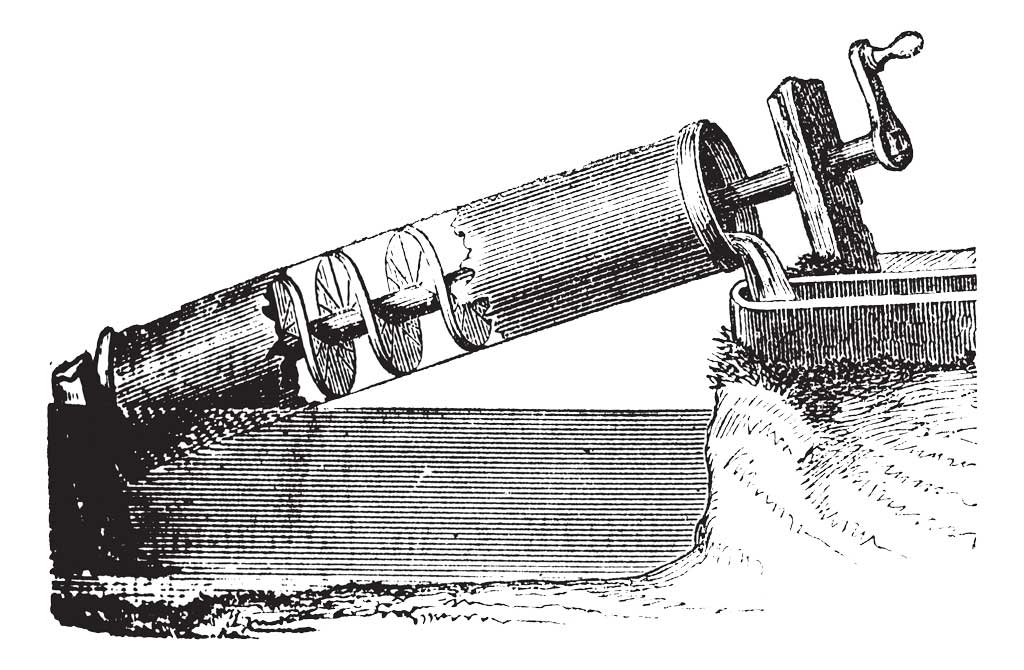 The very lighthouse that was built is credited to a man called… wait for it… Themistocles (the names just keep getting “Greek-er” as we progress down the list!). It consisted of a column made entirely out of stone and had a massive fire at the top which provided the light. One of the famous Greek lighthouses that was later constructed was the Lighthouse of Alexandria, which stood at a towering 100 meters tall, which was enormous for the time. It was later considered one of the original Seven Wonders of the World.

Plumbing, the most glamorous of inventions. On the island of Crete, the Ancient Greeks were found to have used underground for supplying water and taking away waste. Further digging from excavations led to the discovery of vast plumbing systems under the ancient cities of Athens and Olympus. The plumbing fixtures consisted of fountains, baths, and showers, impressive stuff! The lead plumbing system was used to feed these fixtures, and shower rooms for old gymnasiums were shown on ancient vases.

In the early 1900s, an ancient shipwreck was discovered, inside was a plethora of marble and bronze statues, glassware, pottery, coins, jewelry, and a strange looking artefact. These items were removed from the wreck and transported to a museum for inspection. Under further inspection, a gear wheel was discovered within the contraption. This peaked interest, and through further x-rays and gamma-ray inspections, it was found that the device had 82 separate components!

In short, this device, called the Antikythera Mechanism, had a mechanism that drove at least seven various hands at different speeds. These hands represented the Sun, Moon, and the five planets that could be seen by human eyes: Mercury, Saturn, Venus, Jupiter, and Mars. This is widely considered to be the first iteration of an analog computer.

Ever been to the theatre? Well you have the Ancient Greeks to thank for that! An early form of theatre was developed around the sixth century in Greece. It is thought that theatre in India may have preceded this, the form of drama from Greece influenced the western world much more. Theatre in Greece involved many categories, there was comedy, satire, tragedy, and much more. Much of the theatre that we experience today is directly influenced from this early art form. Moreover, the theatres that were constructed to hold this content was, well.. Greek. They could seat thousands of people in one sitting and were a sight to behold.

Have you heard of a water clock? Not many have I would imagine. It was called the Clepsydra, and popped up in ancient Greece around 325 BC. It is a clock, therefore it was used to tell time, but measured time by the amount of regulated water to flow in or out of a particular vessel. These water clocks are known to have existed in many of the ancient civilisations like Egypt, Persia and Babylon. The Greek version however was a more refined iteration and waswider adapted. It was specifically used in trials, to make sure that everyone received the same amount of time to speak.

Cranes are quite simple, they lift heavy objects so you don’t have to. The Greeks thought about it the same way when they invented the first crane around the late sixth century. Archaeologists found cranes that were in use for what can only be assumed as construction of new structures. Another invention we can thank the Greeks for!

This ancient technology has heavily influenced the development of modern technology. The Greeks used water mills to grind wheat, and this allowed them to mass produce wheat and distribute it. They specifically designed two components of the mill, the toothed gearing and water wheel itself. The earliest that this rudimentary technology appeared in ancient Greece was around 220-280BC.

So there you have it, the most unbelievable Greek inventions! Do you have any other inventions to add to the list, or have any thoughts on these ancient creations? We would love to hear from you in the comments below!