One can easily be in awe when witnessing the performance of robotics in outer space. It is proof of the progress and long way we, as a species, have come. Such marvelous inventions represent the most advanced state of our technology and can help a future that doesn’t lie outside the planet’s atmosphere. Surely we should be focusing on humanity? If robots can travel light-years to perform several tasks, hard, unfeasible or impossible for humans, how about travelling to continents to do the same things?

Many of us don’t associate robots with social issues or advancing humans’ health and development. However, many initiatives out there are using both concepts. Reminding everyone that the original purpose of automation was to improve the quality/standard of life for humankind. 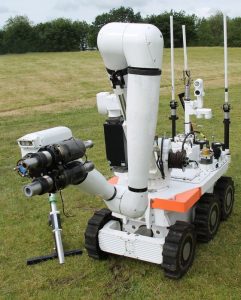 Disaster relief is a crucial response to sudden catastrophes. It is costly, requires sharp reflexes and can prove to be dangerous to rescuers. Robotics, in the shape of drones, could be a great asset for this cause. When rescue teams move in, they will already know exactly where and for what reason. Moreover, drones can map territory, locate victims and improve the efficiency of rescue teams. They can also assist with delivery of aid and provide remote video assessment. Sandia’s robotics program is a noteable example – led by the controversial DARPA. It is specifically designed to deal with hazardous conditions. The type that present a risk while on rescue missions (precipitations, poison, risks of flood..) and reaches out to those trapped. Most importnatly it is possible to provide immediate care tools while also speeding up the rescue process.

Drones can also be used in other applications such as:

Only a few months ago, Malawi officially gave its accord to launch drone testing for medication and services delivery.

Around the world, this persistent problem is managed through various methods, from rats and dogs to metal detectors. These solutions are not efficient or risk/danger free. Fortunately, robotics has already provided first responses: Husky by the university of Coimbra and Digger D-3 have a high rate of detection and can unearth and even recycle landmines. Other army conducted projects include robots capable of collecting the mines and/or logging the exact location and depth.

Water quality, aquatic flora, seismic activities and subterranean water holes are examples of applications that could benefit from robots. Thus reducing costs and the danger to humans lives. Pure Technologies is active in this area via its PureRobotics series.

HiBot’s San Fransisco division deals with robots for inspection of nonfunctional pipes and EPFL, along with other institutes, developed a robotic eel able to locate the origin of water pollution. Wakulla is the first robot cave diver to have successfully explored and mapped a submerged cave. This was the fruit of a decade of work by Dr. Bill Stone and his team.

Japan has already developed a homie robot that can keep you company and perform several tasks for the family. Such robots can also be installed in remote parts of the world, offering educational facilities which may otherwise be lacking. There are also static robots able to supply training and more material for students to study. By helping local teachers: students will be able to do more work outside of the classroom.

For now, there is still no practical testing of the concept. Investment in regions of unrest offers further practical challenges, something which is unlikely to change in the short term.

The mechanical engineer’s guide to industrial design
How to design a new mechanical part in 3D CAD
Skip to toolbar
By using this website you agree to our Cookies usage and Data Transfer in and outside of the EU. We and our partners operate globally and use cookies, including for analytics, personalisation, ads and Newsletters: Find out more.