Karl Benz has a name synonymous with cars not to mention a career which literally changed transport around the world. Born in Germany on 25 November 1844, who would have guessed that he would patent his first vehicle in 1885 and leave a stamp on the world of transport which still reverberates round industry today. So, what do we know about the man himself and his journey from the cradle to a leading mechanical engineer?

Despite being born into relative poverty Karl’s mother worked tirelessly to give him the education she felt he deserved. Originally he looked towards a career in locksmithing but thankfully he found this was not for him and moved towards locomotive engineering following in the footsteps of his father. Despite the fact that he had a relatively privileged education he found it very difficult to find settled employment with an array of jobs over a two-year period including a draughtsman, working for a bridge building company and a designer of scales.

Ultimately this early variation in employment gave him the experience, the breadth of knowledge and a drive to be successful.

At the ripe old age of 27 Karl Benz joined a sheet metal working company although the first 12 months were a disaster with the owner proving to be extremely unreliable. Together with his fiancee Bertha, Benz bought out the company’s owner and after marrying in 1872 they began the quest to develop new engines which were to revolutionise the transport industry.

History shows us that it took more than six years to develop the final version of his first two-stroke engine which was finished on 31 December 1878 with a patent granted in 1879. While some may have sat back on their laurels and patted themselves on the back this was not the way that Karl Benz worked. Not only did patent his revolutionary engine design but he also patented the speed regulation system, the use of spark plugs, carburettor, clutch, gearshift and radiator. This was a man who would single-handedly change the world.

As with so many entrepreneurs Karl Benz came under pressure from financial institutions to restructure his business into a company due in the main to its relatively high production costs. He was forced to take on partners with the creation of Gasmotoren Fabrik Mannheim back in 1882. This reorganisation of his company not only blunted his entrepreneurial opportunities but saw him become but a minority shareholder in the new setup. It was no surprise when he left in 1883 to set up Benz & Company Rheinische Gasmotoren-Fabrik. 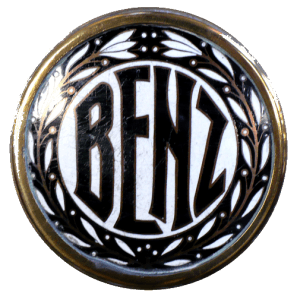 lly the new company focused on bicycle repairs and the manufacture of gas engines it did eventually allow him to return to his first love, the design of a horseless carriage and other automobiles.

The world’s most valuable patent?

It is difficult to keep up with an active and brilliant entrepreneur with the mind of Karl Benz. The creation of a motorised horseless carriage, including a four stroke engine designed by the man himself, led to patent number DRP-37435 which was granted on 29 January 1886 and the Benz Patent Motorwagen was born. Simply described as an automobile fuelled by gas who would have guessed this was the turning point of an industry which would dominate the transport industry for centuries?

It would be wrong to suggest that the early years of the Benz Patent Motorwagen were anything but chaotic and volatile, with the initial version proving very difficult to steer and eventually demolishing a wall during a public demonstration, but he persevered. In a relatively short space of time he created three different versions which were all improvements on the previous vehicle. The unveiling of the third model at the 1887 Paris Expo show caught the attention of businesses around the world.

There is a heart-warming story which has gone down in folklore with Bertha Benz purported to have taken her husband’s latest vehicle on 5 August 1888, without his knowledge, to travel the 106 km to see her mother in Pforzheim. This tale perfectly highlights why the two were so well matched with Bertha said to have spotted a number of design flaws during the journey.

She is said to have instructed her husband to introduce more than one gear on the vehicle and, with the aid of a shoemaker, added what we now know as brake lining in the shape of leather nailed to each brake block. As if to illustrate the ground breaking technology created by this husband-and-wife team there is a “Bertha Benz Memorial Route” celebrated every two years which follows the path of Bertha Benz. This was in fact the first long-distance journey by any automobile at the time and is now seen as an “industrial heritage of mankind” which just about says everything.

We can only guess what impact the Benz’s had on the transport industry back in their day. As you might expect, the ground breaking internal combustion engines and automobile designs were in great demand. In just 10 years, between 1889 and 1899, the workforce increased from 50 people to 430 as the company became the largest automobile operation in the world.

Looking back over the life of the Benz family the transport industry really does have much to thank them for. As the company continued to grow, forced to bring in new partners and investors, Karl Benz was given even greater scope to use his entrepreneurial flair. He created an array of new engines, a revolutionary automobile which could carry two passengers not to mention designing the world’s first truck, the blueprint of which was later used to create the first bus in history.

There is no doubt that Karl Benz created an environment in which entrepreneurial flair and spirit would push the automobile industry to new heights. As his company grew this created intense competition, copycat systems and ever greater demand for his vehicles. The Benz name lives on with the Daimler-Benz company and the Mercedes-Benz brand name and while the man himself passed away aged 84 on 4 April 1929 he will never be forgotten.

Throughout his life it seems he was happiest when able to concentrate on his entrepreneurial flair although he did create the largest automobile company in the world at the time. A man of many talents!