The ideal behind the Lancashire Boiler is very simple, a device which will convert heat energy into steam which can then power an array of devices. Sound simple?

Basic design of a Lancashire Boiler

The device itself is encased in a large metal drum which is traditionally up to 10 m in length and 6 m in width. Within the metal drum casing the main elements are the two fire tubes which run the length of the drum and create the steam required to power various devices. The majority of the drum is encased within brickwork which obviously adds stability to the boiler but also plays a major role in diverting the flue gases which ultimately heat the water.

Before we take a look at the fire tubes it is worth taking note of the two side areas and one area underneath the fire tubes which are used to control the flow of hot flue gases. However, before these gases can be diverted as efficiently as possible, within the brickwork surrounding the drum, they need to be created. 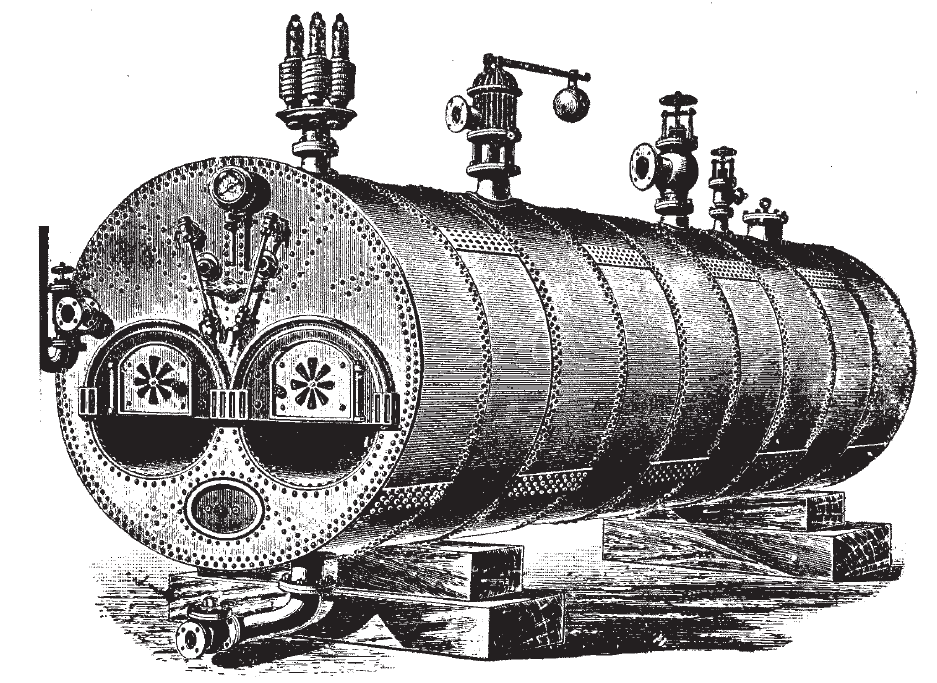 The whole point of the Lancashire Boiler is to create an environment where hot flue gases are used as efficiently as possible to maximise heat and steam. Tests show that flue gases passing through the fire tubes are able to transfer between 80% and 90% of their heat to the water which is surrounding the pipes. The backward flue gases convert between 8% and 10% of their energy and the side passages from 6% to 8%. So, when you bear in mind the simplicity of the Lancashire Boiler it is when created in size a relatively efficient machine.

It is interesting to look at the brick wall in which the majority of the boiler system is enclosed because this plays more than just a supportive role. As the hot gases are propelled out of the fire tubes some of the heat energy is maintained within the brick system which adds a continuous energy input heating the water. While retaining a portion of the heat within the inner workings the brick work also acts as an insulator due to the slow seepage of heat towards the outer area.

Other elements of the Lancashire Boiler

While we have described the main elements of the Lancashire Boiler above, there are others which include a safety valve for added protection, steam release valve to power various devices as well as a chimney through which the flue gases will escape. The water entry point is also very important because this allows the user to ensure that the fire tubes are submerged at all times while leaving enough space above the waterline to create the ultimate steam output.

In order to obtain maximum efficiency from the Lancashire Boiler design they need to be relatively large in size. In reality they are large enough to accommodate a manhole cover for somebody to go inside and clean the inner workings.

Advantages and disadvantages of the Lancashire Boiler

There are a number of elements to the Lancashire Boiler system and on many points it does stand up to comparison against a modern day boiler system. Some of the main advantages include:–

As you might expect from a device which first appeared back in 1844 there are some disadvantages when comparing it to a modern day boiler system which include:-

The design and limitations of the Lancashire Boiler mean that it is more appropriate for stationary installations, perfectly illustrated by the fact it was popular with cotton mills in years gone by. There have been a number of improvements over the years and even though the system does have its limitations it is relatively efficient if not a little cumbersome.