Metal 3D Printing can be quite confusing and intimidating because of the sheer number of different names and processes even though most of the names are not indicative of different processes. Way back when DMLS (Direct Metal Laser Sintering) and SLM (Selective Laser Melting) were patented by Pierre Ciraud and Russ Householder there were very few names. Then Carl Deckard made the first SLS (Selective Laser Sintering) machine, which in general refers to a variety of different materials that could be used, and EOS (a german laser sintering company) together with others released the first DMLS. However, when these companies separated they coined a plethora of names for their fundamentally similar machines so that they could differentiate their products and patents from each other. DMLS and SLM both run a laser over a bed of powder to build up the material one layer at a time. 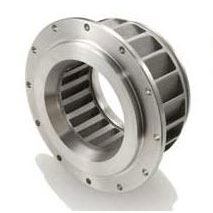 The difference is in the way the material is built up. While SLM will melt the material together layer by layer into one homogenous part, DMLS simply fuses the individual layers. As a result, SLM is the process used for metals with a single melting point, like pure titanium. On the flip side, DMLS would be your choice if you wanted to use an alloy because it allows for multiple melting points within the material. This difference is not so much due to limitations in technology as is it patent infringement. DMLS can’t infringe on SLM’s patent and vice versa. It is important to keep in mind, however, that post processing for metal 3D printing is different than with plastic. Because the metal part bonds to the plate in order to print, the part must be removed differently then scraping off a plastic part from an Objet machine.

The similarity between metal and plastic printing is in the geometry being printed: much like SLS (Selective Laser Sintering) for plastic printing, if you print a cavity inside of your part and then close it, the powder will be inside. Additionally the post processing required will also be directly related to the purpose of the part. All in all, which process you choose will be determined by the material you’re intending to print and the functional requirements of your part.

One Response to Making Sense of Metal 3D Printing

10 ways you can make your CAD models more FEA-friendly
20 Great Reasons to Become a Mechanical Design Engineer
Skip to toolbar
By using this website you agree to our Cookies usage and Data Transfer in and outside of the EU. We and our partners operate globally and use cookies, including for analytics, personalisation, ads and Newsletters: Find out more.