Heterogeneous materials are gaining more popularity in use for manufacturing high-tech parts. This means that analyses and certifications need to be conducted and will therefore require a thorough understanding of the behavior and responses of such parts. While many are working on analytical and mathematical models to describe the properties of these materials, there is another way of approaching the challenge: Getting a detailed and virtual buildup of the part that will contain all its phases, defects and other details. This is know as microtomography!

Enter the world of microtomography

Microtomography is an imaging technique that builds up 3D images of a part’s internal structure through X-Ray radiography. Its name derives from the average size of its RVE (Representative Volume Elements) that is usually of 40 micrometers, thus allowing a mesoscopic display of the details of the part. Previously used in the medical field, microtomography uses X-rays in the same fashion as scanners.Microtomography

Enter the world of Microtomography

The process involves rotating the parts while subjecting them to an x-ray source and capturing the images. The latter occurs when the detector behind the object receives and measure the absorption degree of the rays. Through numerical imaging treatment the shots are treated and the picture is formed following a gray scale. The main difference between tomography and scanning is the rotating parts: the scanner’s rotating is in the view angle of the object, while the tomography’s x-ray source is fixed and the object is the one rotating

The last step is being investigated by different bodies throughout the world as there are several variations of software, techniques and codes that are built or can be improved to pick on the different materials the part is made of (short-fiber composites, 3D woven composites, organic materials, etc)  The main challenge is to be able to detect different homogeneous inclusions that are assembled or very close to each other (as in the case of tows of fibers within a woven composite). There are several methods in microtomography such as the absorption method, the phase contrast and holotomography.

All of them deal with different applications to absorb the x-rays and separate the information received about phases and shapes. From the 3D body we are not only able to proceed to meshing and analysis, but we can also pick on internal flaws and detect cracks.

One of the setbacks that researchers are facing is the quality of the code used in the interface: they tend to simplify the small phases and eventually don’t allow their properties to be properly taken into consideration. This can greatly disrupt calculations in cases where the small phases are the materials providing the strength of the part, such as carbon/glass fibers. One of the models that exploits microtomography screening to properly render the fibers is the Wendling model. It is seen by many as the foundation of microtomography. 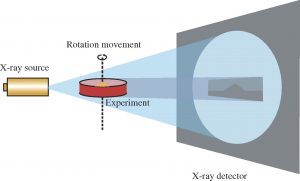 The other issue is the lack of automated analysis for mass produced parts and the cost of the technique to make it a mass analyzing one. In addition, picking on the microdetails of the parts doesn’t make analysis and simulation any easier. The number of finite elements to treat the details will be either too big for current software/hardware capacity or too tricky for convergence and matrix calculation. The need for an averaging method still stands. It is worth noting though that in particular cases of critical parts in woven composites (such as fan blades of shuttle main structural parts), microtomography proves very competitive and provides the thorough insight one needs to conduct analysis in different areas of the parts.

Bridges of Communication : Bringing Science to the Public
Suborbital Flying with Blue Origin
Skip to toolbar
By using this website you agree to our Cookies usage and Data Transfer in and outside of the EU. We and our partners operate globally and use cookies, including for analytics, personalisation, ads and Newsletters: Find out more.