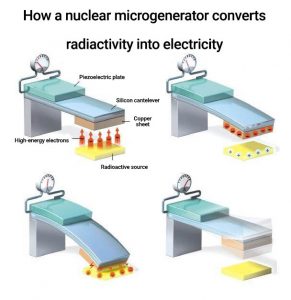 Scientists have demonstrated a prototype nuclear battery that relies on a fundamentally different mechanism to produce energy: Radioactivity. In a typical setup, a copper cantilever hangs freely over a radioactive sample. The cantilever is quite small – only about 40 micrometers thick and 4 millimeters long. The nuclear sample spontaneously decays emitting negatively charged beta particles. These particles jump over the tiny air gap and fall on copper. The copper rod, therefore, turns negative while the electron depleted sample below becomes positive. The opposite charges attract each other causing the copper cantilever to bend downwards until it touches the radioactive sample. The charges quickly neutralize and the copper springs back into position, vibrating like a string as the next round of charging and flexing begins. The battery runs on the short pulses of electricity produced each time the charges neutralize. Ni-63 has a half-life of 50 years, which means that these batteries can run for a couple of decades at least. So far, this prototype has generated around 5 mW of power over a period of 10 milliseconds. This is sufficient to power a small wireless sensor or radio frequency transmitter.

Nickel-63 (Ni-63) is the radioactive material powering the device. Compared to ordinary harmless nickel, these atoms carry five additional neutrons, which make them highly unstable. However, the emitted radiation is so weak that the ever-present layer of dead cells on the surface of the skin is enough to block the beta rays from entering the body. The radiation does not penetrate more than 25 micrometers of any solid, permitting the device to function with only a plastic coating.

Why this is a new era for radioactive batteries

Radioactivity has been used to power devices before. The Voyager 1 and 2 spacecrafts were powered by nuclear thermal generators that converted radioactive energy to electricity using thermocouples. These devices were the size of a washing machine and could not be scaled down to the level of the microbatteries. The nuclear microbatteries, therefore, work on a totally new mechanical paradigm allowing its integration into many MEMS systems. The challenge that these devices face is the small magnitude of the power generated. However, the team at Cornell University that developed this device has also demonstrated a piezoelectric version of the device with higher energy density.

A piezoelectric is a ceramic that creates charges on its surface when subjected to any sort of mechanical stress. By attaching this material to the surface of the cantilever, each time the copper bends, it flexes the piezoelectric – generating more power. These cantilevers are so small that hundreds of them can be stacked next to each other in a square centimeter scaling up the current produced.

Several applications of these nuclear micro batteries have been proposed. If the cantilever is made from a high dielectric constant material sandwiched between electrodes on each side, the charge fluctuations emerge as low-frequency radio waves – in effect forming an antenna. A natural application of these devices is in systems that are near impossible to reach such as space and underwater operations.

Online courses engineering students can take during the lockdown

Online courses engineering students can take during the lockdown
3D Printing Software overview
Skip to toolbar
By using this website you agree to our Cookies usage and Data Transfer in and outside of the EU. We and our partners operate globally and use cookies, including for analytics, personalisation, ads and Newsletters: Find out more.