Lessons we can learn from the sinking of the Titanic 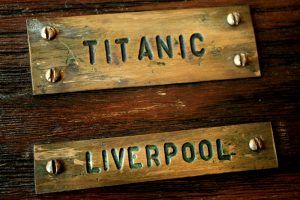 I was watching a TV program about new data and photos from the Titanic when suddenly my wife remarked: “You engineers must be learning a lot from these investigations!”

It is easy to criticise

I quickly scanned my memory: unlike investigations of airplane crashes, the Titanic is a century old technology. The art of riveting is obsolete and gone long ago, replaced by welding, which in itself has seen many changes since it was introduced into ship building during the second world war. We have modern means to test our structures against hidden defects. We have computers and sophisticated programs to design and test our products even before sending the first drawing to the machine shop or to the shipyard. We use worldwide communication systems that the captain of the Titanic could not even dream of. Instead of using lookouts in crow’s nest with binoculars at best to watch against icebergs, we use satellites and radar.

Any lesson to learn from the sinking of the Titanic?

“No,” I answered. “There is very little useful engineering data that we can gather by studying the sinking of the Titanic. The most useful data for us comes from the design and operating of the modern RVs – those deep sea robots that were built and used for this research”.

“So, if all this enormous effort is useless for you, why then do you find it so interesting? Is it only for your curiosity and human interest just like myself? No added engineering value?” She sounded disappointed.

Why indeed I find interest in the Titanic? Are there really no useful lessons there for us engineers?

The challenge of human nature

While technology has developed rapidly, fast enough to make obsolete practically all technical data from the Titanic, the human nature has not!

It might be nice to know how and why the Titanic broke in half at exactly the spot it did. However, nobody needs this information today in order to improve the strength of the hull of a new giant tanker, and indeed it did not help to prevent the breakage of the Exxon Valdez and the disastrous oil spill near the coast of Alaska.

On the other hand, it is important to understand the nature of ourselves, humans, and our tendency to vanity and arrogance. This way maybe we can understand why captain Edward Smith gambled against the icebergs, not changing his course and speed. Much like the gamble of captain of the Costa Concordia, Francesco Schettino, that did change his course and wrecked his ship near the coast of Italy for no reason other than arrogance and show off.

Will we ever neutralise human error?

You may claim that these stupid decisions have nothing to do with engineering, but what if the captain of the Costa Concordia had a computer program that prevented this gamble by analysing the sea floor and the ship data? What if the captain of the Titanic had a detailed manual to tell him that in his situation a head on collision with the iceberg was safer? This is exactly the type of solutions that are being routinely sought by today’s engineers in the aircraft industry.

We are used to designing things against the elements and the physical environment, but it is as important to design against human nature too, as we have done for quite some time – something known as human engineering. However, this is not easy! A grim evidence to that is the case of the Germanwings passenger plane crashed by his co-pilot Andreas Lubitz, using the anti-hijacking locked cabin door for his protection.

Do we invest enough in safety backup systems?

There is also another important lesson that we can learn from the Titanic. The single most important reason for the large loss of life in the Titanic was the absence of lifeboats for all people on board. This was more or less the standard practice at the time, and it was perfectly legal then. The main reason for not supplying enough lifeboats was the wish of the owners to keep as clear view to the sea from the upper deck as possible. I wonder what the designers had to say about it. Maybe they supposed that was OK since the ship was considered unsinkable, demonstrating their arrogance by thinking that they can have the upper hand over nature. But maybe they just did not have a say against the owner and customer, and they wanted to keep their jobs. Isn’t that similar to the explosion of the space shuttle Challenger, due to an O-Ring failure caused by cold weather, where management dismissed engineering warnings?

There is always tension between engineers and managements, who always think money first and safety after, something that was as true in 1912 as it is today. True, the blame lies heavily on the captain that decided to sail at full speed through the ice field, to serve the interest of the owners in sticking to schedule, but can the designers live with their conscience for not doing their best to persuade their customer to put more lifeboats aboard?

Human error will always be a factor

We should never forget that we, engineers, are humans, prone to human errors, and that we work with other humans with their inherent weaknesses, for the wealth of humanity. Why don’t we have practical sociology and psychology classes in engineering schools?