What is SolidWorks PDM?

SolidWorks is a solid modeling computer-aided design and computer-aided engineering program that is used for prototyping, planning, visual ideation, feasibility design and project management. It is then used for the design and building of electrical, mechanical and software elements, and the creation of assemblies, drawings and parts.

The PDM stands for Product Data Management, this means that it works as a file management system that controls and organizes all important engineering documents. This is not limited just to the aforementioned SolidWorks assemblies, drawings and parts, it can hold any file related to the project and also allows sharing of these files between any departments within the company.

A “First Look” at the SolidWorks PDM software can be found in a short video provided by SolidWorks:

There are two different versions of SolidWorks PDM:

The difference between the two comes down to licensing, PDM Standard is included with all SolidWorks licenses (Professional or Premium). If you own SolidWorks Standard, an upgrade to Professional is needed to acquire PDM Standard.

The top tier version PDM Professional allows customization and has multi-site capabilities which include synchronization with any location. It has Bill of Materials (BOM) Management, an engineering change module, reporting module, Enterprise Resource Planning (ERP) integration plus electrical/mechanical design integration. There is also a third module to PDM which brings functionality similar to Microsoft Project into the PDM software.

The PDM software uses the Windows operating system and modifies it to understand the intricacies of engineering and to recognise SolidWorks files. If SolidWorks PDM was not to be used, the user would still be using the PDM approach, just with the default Windows functionality, by manually organizing your files/projects using Windows’ filenames/folders. 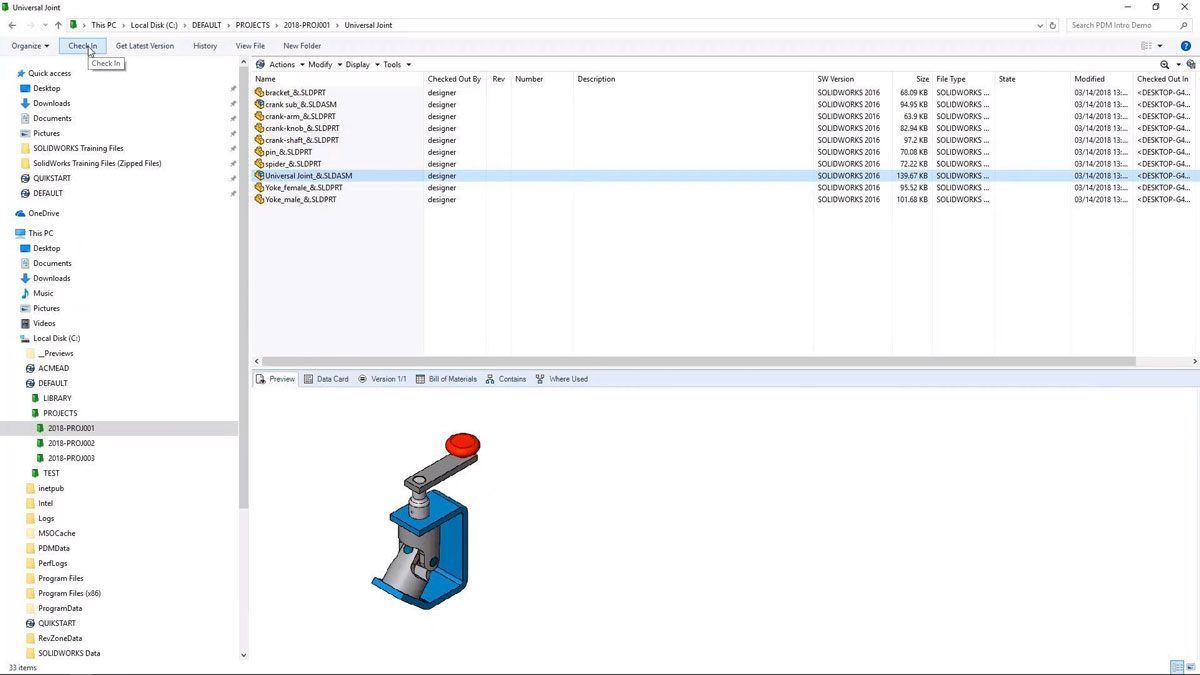 The SolidWorks PDM interface is comfortingly similar to the Windows Explorer interface that so many are comfortable with.

SolidWorks users have been found to spend 30-40% of their time annually carrying out Windows PDM tasks that are automated by SolidWorks PDM. PDM also solves issues with working on client machines and servers. When working on SolidWorks, the files are constantly reading and writing over one another, which can affect the bandwidth of the server/network as it is likely to be significantly less powerful than the workstation that is being used. Implementation of the SolidWorks PDM server will then increase the performance of the SolidWorks program by a third.

This shows that every SolidWorks user should be using PDM because of its many benefits for performance and efficiency, and it is by far the best PDM solution for users to manage their engineering data, promote design reuse and increase output. It is also important to note that PDM is a file management system not just for SolidWorks, it has plug-ins for Microsoft Office, AutoCAD and also for many other 3D CAD systems like: Pro Engineer, Solid Edge and Inventor.

One of the biggest reasons that companies do not use a PDM system is because they are afraid of the “implement creep”, an endless process of integrating the PDM software into their existing workflow. Solidworks PDM Standard can be implemented in two to three days, and PDM Professional in five or more days, which instills a confidence in the company that the project is going to be successful.

The following tools and features contribute to this confidence by allowing and encouraging collaborative working, while also providing general product lifecycle management:

While working within the Windows Explorer file structure, the first user that opens SolidWorks has full control of the file. Noone else can open/use the file, or edit any of the components. This can lead to accidental deletion, edits and will cause delays and loss of work. As the Windows file structure allows any company user access to the file system, there is no control or restrictions as to who has access to the important project data.

With PDM, every user is provided with a username and password, and with these different profiles permissions can be edited, access can be denied to certain folders and important functions be designated to those who have the authority. Any changes logged by a user are recorded in the system, with the user’s details and timestamp. This gives clarity and traceability on all operations, something that Windows does not provide.

SolidWorks PDM is a very proficient data organizer. Solidworks files can be compared to the run-of-the-mill Microsoft Word document, all of the information is contained within the file itself, and when copied to another location and opened, everything is in its place and where it should be.

However, moving upwards towards drawing and assembly level, the files contain external links to other documents, which means that the information within the file is somewhat dependent on the various other files that it links to. Because of this, moving these files becomes more complicated, as the paths to the external files must remain intact for the file to work.

When using Windows, time is lost trying to discover the relevant files and repair the missing links. Using PDM, users move files within the SolidWorks Explorer, which maintains the references in the drawing or assembly and recognises and updates them once the file is moved. The reference structure remains intact, and the SolidWorks PDM workflow continues seamlessly. 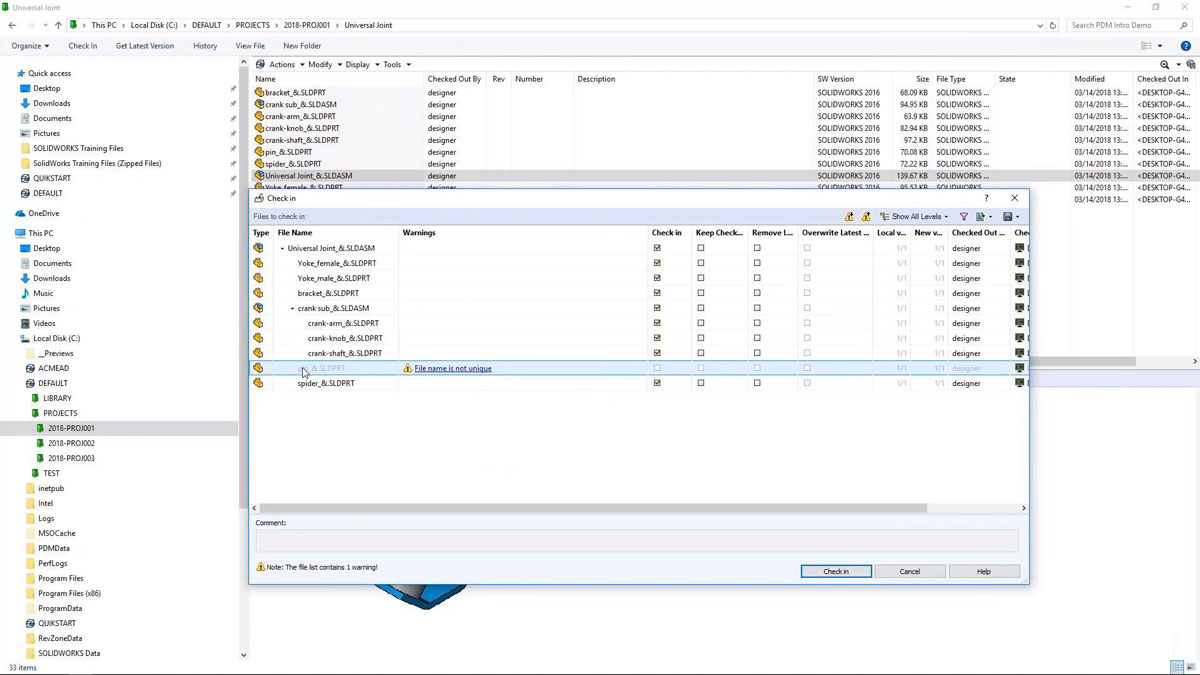 PDM indicates that the “File name is not unique”, indicating that it is a duplicate of another file already in the system.

PDM users can avail of the SolidWorks interface to look and search for files, a tab on the right hand side will provide the folder structure to be accessed. Files can be “checked-in” and “checked-out” using a right click menu, this combined with features like taking ownership of a file (preventing access to any other user), and transferring files from one project to another.

Comparing your current file against the server is possible to ensure that you are working on the latest version of that file, with reporting and searching tasks also available to improve the users workflow to an even greater extent. 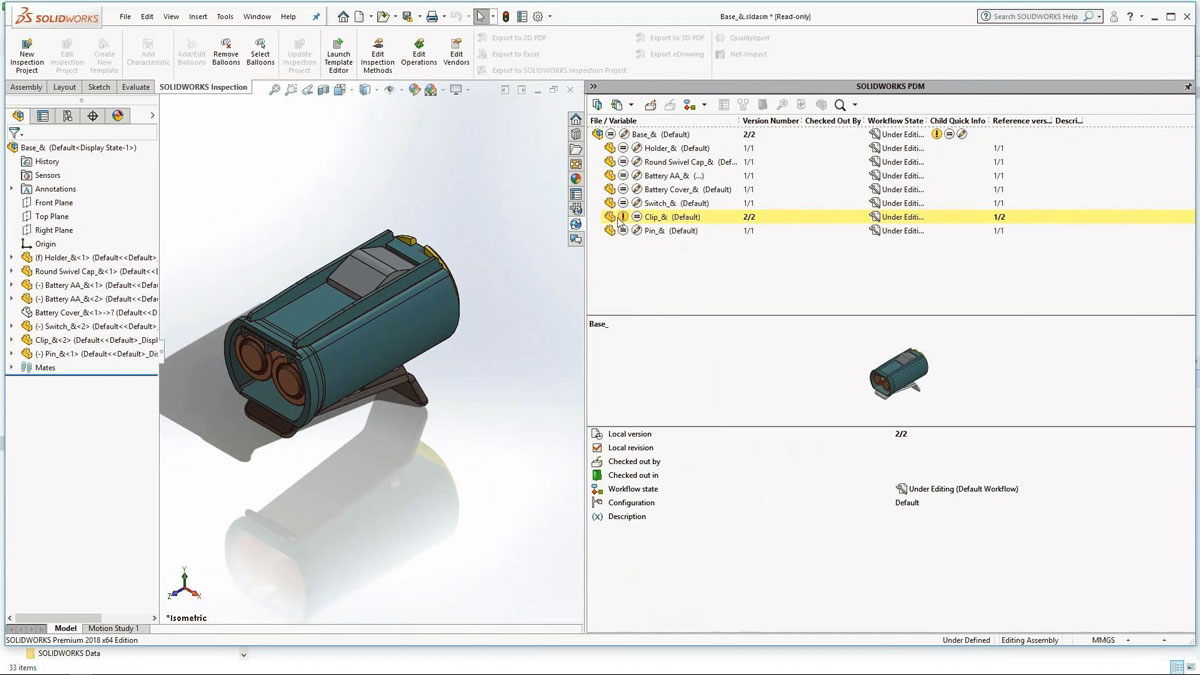 One of the most common tasks a SolidWorks user performs is to search for files. With Windows, you are limited to searching through Windows Search, which primarily relies on filenames to search. Searching for files with PDM allows the user to avail of more information that the file possesses, such as: manufacture ID, part number, material and many more.

This metadata is made available by the SolidWorks software and allows a much quicker, comprehensive and effective search, sparing the user time and effort. It also prevents duplicate parts being created in the system and encourages the re-use of existing parts that may already have been made in the past. The search interface is simple and easy to understand, perfect for quick and efficient use.

SolidWorks PDM is a powerful tool, and can definitely enhance the efficiency of medium to large enterprises that need the ability to alter management features and enhanced collaboration capabilities. The good news is that as teams grow and expand, their reliance on PDM increases, and the migration from PDM Standard to Professional is quite seamless, and just opens the door for more scalability and functionality.

What is PTC Creo

The Differences Between Metal vs. Plastic 3D Printing
Industrie 4.0 Deep Dive. Part 3: Networks and Sensors
By using this website you agree to our Cookies usage and Data Transfer in and outside of the EU. We and our partners operate globally and use cookies, including for analytics, personalisation, ads and Newsletters: Find out more.