Of all the powering options available nowadays, heat engines were the first to be developed in the industrial years, and they remain a classic choice within mechanical systems today.

Despite physicists’ attempts to refinine and optimise the design, improving the thermodynamic cycles within, heat engines remain trapped within the Carnot Limit. This limit is depicted by the difference between the efficiency of an engine on paper compared to its actual efficiency when manufactured, due to real material use and irreversible heat exchange within the engine. Theoretically speaking, mechanical designers can make an automotive machine provide much more torque that what is realistically available. However, the heat 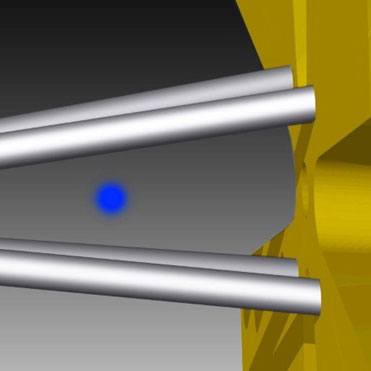 A single trapped ion in a linear Paul trap with special geometry: The heat engine is being realized by the divergent bars; the squeezing is being caused by establishing special electrical fields. (Image courtesy of Quantum, Atomic, and Neutron Physics (QUANTUM))

generated can’t be cooled down quickly and safely enough to avoid an explosion within the engine. This is another characteristic of the Carnot Limit, and it is what German industry has been looking into during the last years.

Scientists at JCG, Mainz, Germany have been working on a heat engine that relies on a Calcium 40 ion trapped within a Paul Cage to act as a heat engine. Basically, a Paul Cage is typically made from four electrodes that ensure electric fields are able not only to trap an ion, but to induce a controlled motion according to the designer’s configuration. The construction of a prototype is currently taking place based on an initial design. The main advantages of this new model would be: exceeding the Carnot limit and simplifying the design of an engine that is heavier, takes up space and is prone to unreliability, due to multiple parts involved in the mechanism.

Regarding how the ion heat engine works, Johannes Roßnagel of the Quantum, Atomic, and Neutron Physics (QUANTUM) work group of the JGU Institute of Physics explains that “Individual ions can basically act as the piston and drive shaft or, in other words, represent the entire engine”.

If the experiment proves to be successful, heat powering will enter a new phase, but it appears nonetheless that a single ion heat engine wouldn’t be enough to provide adequate energy to run a car. Initially, nanotechnology is most likely to benefit from it instead, and be spared the big cooling units relative to its components’ sizes.