Technology and the Electric Guitar

The electric guitar industry can be described as a closed industry. It is difficult to get new ideas accepted in a field that is already overburdened with products (instruments and accessories). The electric guitar is difficult to define as a product. It can be said that it is an instrument of craftsmanship so shrouded with historical and cultural connotations to be labeled as such. Nevertheless, there have been many cases in its development where its treatment (especially by manufacturers) can be described as being “as a product”. Segovia proclaimed the very thought of an electric guitar was an “Abomination… …to take such a noble creation and plug it in like a kitchen appliance”.

Early development of the electric guitar grew out of necessity and musical trend, rather than being a direct response to the advent of new technology. The technology behind the electromagnetic pickup and amplifier had been around for a while, and it was adapted to the guitar in order to make it audible amid large bands. There is no definitive date for the invention of the electric guitar, although the first to be manufactured commercially was in 1932 by Adolph Rickenbacker, a Swiss die and tool maker (see Fig.1).

Since the introduction of the electric guitar, there have been many refinements and developments up to present day, many involving new and exotic materials and manufacturing processes. It is the purpose of this article to discuss their implications.

Throughout the evolution of the modern electric guitar, there have been many new ideas and experiments with material and components. It can be said that some developments are not so technology-related and could be considered to be ‘refinements’ of existing designs. Some examples of these are as follows:

The Humbucking pickup: Single coil pickups were initially used to detect string vibration and pass the signal to an amplifier. The humbucking pickup (Fig.2) was a development from this and provided a more stable unit which reduced hum and unwanted unpleasant feedback. This was especially suited to heavy-rock musical styles where high-volume distorted sounds were required. The humbucking pickup was a successful development and was initially featured on Gibson Les Paul guitars. However, it was merely a re-think of an old concept. 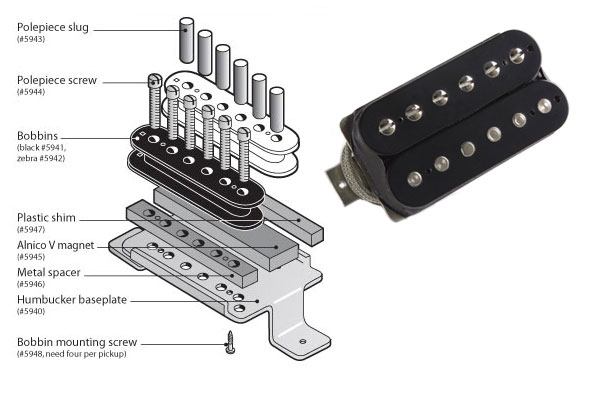 The Floyd-Rose tremolo: (Fig.3) was also a development from an earlier design. It incorporated a system whereby guitars could remain in tune while strings were stretched to alter pitch. This was achieved with the design of a lockable nut which effectively clamped strings down so that their tuning could not be affected. Although this was a very successful development, this was merely an improvement on existing tremolo devices, such as the mechanically simpler “non-locking” versions used on Fender Stratocasters. 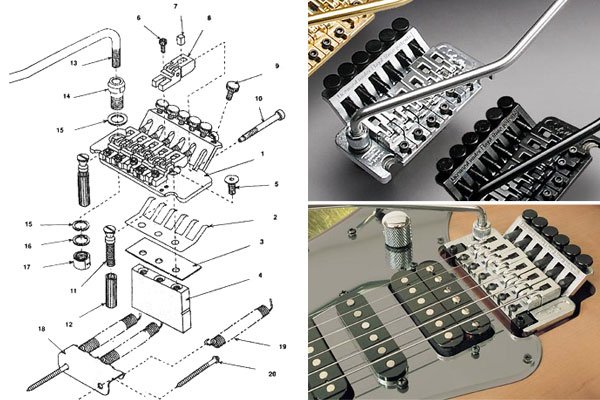 Materials: Electric guitars have been traditionally made from wood. Tonewoods, selected for their resonant characteristics are the most popular. Rosewood, mahogany, maple and basswood are amongst the most common. Non-traditional materials such as plastics, composites and modern alloys have also been experimented with. Guitars using such modern materials have had great difficulty being accepted by guitar players who are generally conservative in their outlook, preferring to remain with famous and established instruments – the Fender Stratocaster and Gibson Les Paul for example.

In many cases such modern instruments are technically superior to their more ‘traditional’ counterparts but have not received the same level of recognition by any comparison.

That said, in the 1920s and 30s, the companies National and Dobro introduced “resonator” guitars with metal bodies. These were examples of a successful use of an alternative material to wood. These guitars were popular because they had superior resonance and sustain.

However, there are many examples of have more alternative material selections have not been so successful. Below are some examples:

These distinctive guitars were originally designed by Ned Steinberger, an industrial designer in 1978, and released in 1981. This represented the most radical innovation since the introduction of the Fender Stratocaster. It also represented a hi-tech minimalist approach with the loss of a headstock and reduction of body size. Instead, the tuning heads were located at the bridge and the neck was a composite of epoxy resin and carbon and glass fibre. This created reinforcement and aided tonal qualities that were poor on wooden prototypes. The small body was composed of reinforced plastic. Paul Trynka states that Steinberger guitars’ “practicality was matched by their sound” and that they represented a “huge improvement” over forbears. The Steinberger guitars were very successful on a short term basis, but their controversial aesthetics were not fashionable for long. Another guitar manufacturer, Status Graphite employed similar techniques into their instruments utilising woven carbon fibre necks, but also including exotic woods and advanced electronics. These instruments have been also hugely successful. Session musician Tony Levin acclaims the instruments for their tonal versatility, while John ‘Rhino’ Edwards (bassist of Status Quo) endorses them for their superior practicality and strength over other instruments.
Parker Fly Guitars

The Parker Fly guitar is another example of a modern instrument that makes use of composite technology (Fig.5). This guitar attempted to achieve the tonal properties of both acoustic and electric guitars via a body constructed of a tonewood core with a carbon fibre matrix/epoxy resin shell. The guitar also utilises a phenolic fingerboard. A CNC routing system was employed to produce a neck joint designed to enable the entire instrument to vibrate as a coherent whole. Rob Turner from pickup manufacturer EMG states that the idea of the Parker Fly is definitely a good one, but the only way people will buy such an instrument is if Jimi Hendrix comes back to life and plays one. This suggests that regardless of quality, consumers are only interested in emulating their heroes even though that may involve purchasing an inferior product. Les Paul has stated also that the guitar industry is “stuck in the past” which highlights the fact that mainly due to consumer pressure, new ideas are seldom accepted because people will only buy guitar models that are associated with a musical figurehead. This also serves to indicate that although modern guitars, utilising new techniques and materials may be better quality and more versatile, guitarists want to emulate their heroes and use exactly the same ‘brushes, paint and canvas’.

The subject of ‘on board’ active electronics is an area of technology which has met with poor response from consumers of electric guitars. There have been many attempts to include synthesisers, effects units and electronic gadgets within the bodies of guitars, and all to date have been relatively short-lived. Such innovations are generally considered as being gimmicky and unnecessary, with some attempts actually altering the identity of the product so that it almost ceases to be a guitar. The Italian firm Godwin created the ‘Godwin Organ’ in the mid ’70s which was terribly overcomplicated and very difficult to play, beset with weight, balance and reliability problems (Fig. 6). It was an attempt to combine an electric guitar with the qualities of an organ and proved extremely unsuccessful. 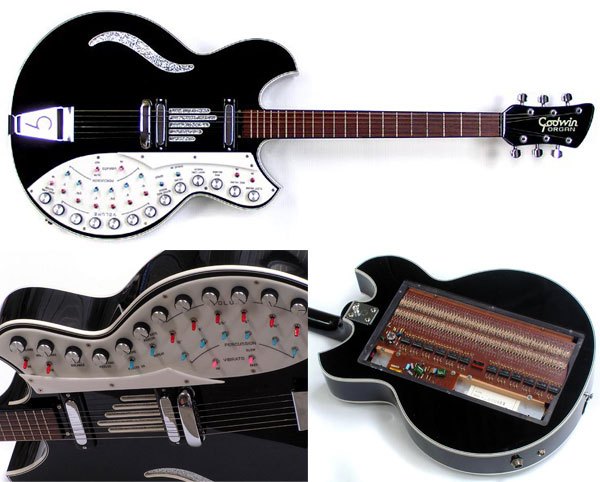 Due to a slight decline in popularity of the electric guitar during the 1980s, many attempts were made to create a guitar synthesiser in order to keep up with the immensely popular keyboard synthesisers. This is an example of an area where technology has been combined with guitar design to its most radical degree, the main aim being to produce a MIDI guitar so that its output was purely digital. This proved a technological nightmare for manufacturers like Yamaha Casio and manufacturers of the SynthAxe. To produce a digital signal, the keys of keyboards act as on/off switches, making them relatively simple as MIDI devices. It was extremely difficult to do the same with guitars – finding a way of producing digital signals for playing nuances like bends and vibrato proved a major technical challenge. The British SynthAxe (Fig.7) provides a useful case study of a guitar synthesizer:

The SynthAxe was technologically very advanced and could recognise a player’s subtleties. It utilised transducers to read sideways movement of the strings when they were bent. If strings were muted by the player’s right hand, changes in electrical resistance would be detected and converted to a digital signal. However the product did not appeal to players because it required musical technique to be adapted to suit it. For example, the SynthAxe had two sets of strings – one for each hand. It was also cumbersome. The SynthAxe also had a radical design flaw – unlike a conventional guitar, the fret spacing did not become closer together towards the bridge, and instead remained equally spaced. Such radical departures from conventional instruments only served to alienate guitarists. This, plus the radical and unconventional aesthetics served to render the SyntyhAxe almost too unlike an electric guitar to actually be one. Its price tag of around £9,000 only reduced its appeal even further. 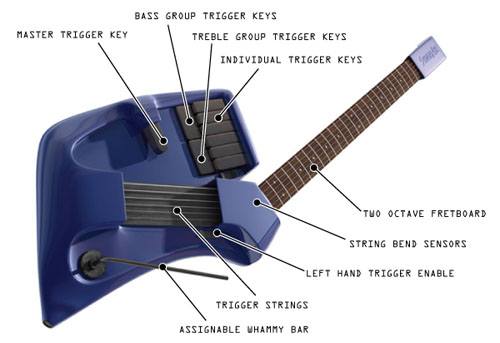 There are many examples of new technology, materials and processes being associated with the modern electric guitar. Despite this, the consumer has remained conservative in its approach, favouring ‘established’ instruments such as the Fender Stratocaster or the Gibson Les Paul. ‘Vintage’ instruments of these types are particularly sought after. Many guitarists have a misconception that guitars sound better the older they are. For example, in 1965 CBS puchased the Fender company and implemented mass production methods to produce their most popular instruments such as the Stratocaster in high-volumes. This subsequently led to a reduction in the quality of the guitars due to cost-reduction at the expense of quality. This prompted guitarists of that era to seek out the superior instruments that were manufactured pre-1965. It is ironic that today, many guitarists are interested in seeking old instruments from the CBS days, even though they may be poor quality. This demonstrates that the average guitar consumer is conservative in outlook and such philosophies point to the fact that there is little place for new materials and technology to be incorporated into electric guitars. In the mid-1990s, Fender began production of a new series of Stratocasters branded the “Relic” series. These were actually newly manufactured guitars which had been artificially aged and fitted with older designs of components. This ‘backward step’ underlines the fact that the electric guitar industry is driven by fashion, rather than technology or innovation. It is stated by Paul Tyrnka that in the electric guitar industry, product direction is decided as much by the players as by the manufacturers. This is substantiated by the failure of highly sophisticated and advanced products such as the SynthAxe.

There have been many attempts to combine technology with the electric guitar, often resulting in superior products to their traditional counterparts. Despite this the consumer often reluctant to embrace such changes, and prefer to continue manufacturing products using traditional materials and features. The guitar is an industry surrounded by tradition and culture and is far removed from many other forms of industry. It is one that is driven by emotional and lifestyle factors, and is heavily influenced by celebrity take-up and endorsement. It is possible to produce better instruments by applying new technology and materials, but classic designs such as the Fender Stratocaster and the Gibson Les Paul will be the most popular for a long time. 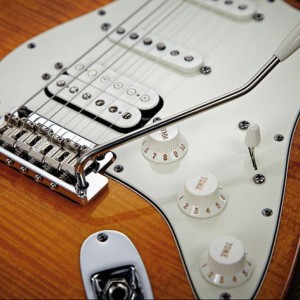 1 thought on “Technology and the Electric Guitar”