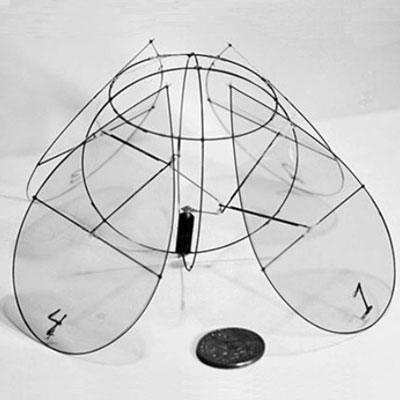 Human innovations are often inspired by, and at times copied from, the existing designs of nature. Human flight is one example where man adapted one of nature’s existing methods and used it in his own technology. While the aircraft and aerospace industries have improved the performance and perfected the designs of their flying machines, they have never strayed far from the original bird-like design.

Leif Ristroph from New York University explains that he initially wanted to use flying insects as a primary model. But the instability of that model made it too difficult to manage; a fly or a bee will constantly assess its environment and adapt its motion, which proved quite complicated to reproduce in a mechanical system. The amount of sensors, micro-processors, responding automated systems, and other hardware required was deemed too costly and heavy to be practical.

During the development phase of the design, Ristroph had the idea of emulating the jellyfish’s swimming motion. He created a pyramid shape with four wings that propelled or “squirted” the air, similar to a jellyfish’s motion. The model was analyzed using mathematical modeling and seemed stable, and a prototype was created. The stability of the design is explained by Ristroph: “It’s a pyramid shape. It has a different drag coefficient when the air is coming up versus when the air is going down. Over one cycle the asymmetric shape leads to a new upward force, a lift that can balance the body weight so the pyramid can hover in the air.”

The prototype shown at APS Pittsburgh weighs two grams and is 8cm wide. It is equipped with four wings arranged in a pyramid shape, resembling a flower’s petals. The main components are a vibrating motor and some components made from a type of carbon fiber commonly used within cellphones and remote controls. It costs less than $20.

The device seems to harvest energy, using air currents to create its own motion, but it’s still a mystery how exactly it maintains its flight path and direction. Still, the jellyfish design is a proof of concept that could be developed and studied for use as a weather surveillance robot, among other possible applications.

Top 10 Most Innovative Products of All Time – what are yours?

20 Great Reasons to Become a Mechanical Design Engineer
Bioprinting: 3D printing LIVING tissue
Skip to toolbar
By using this website you agree to our Cookies usage and Data Transfer in and outside of the EU. We and our partners operate globally and use cookies, including for analytics, personalisation, ads and Newsletters: Find out more.