In this article, we will explore an interesting engineering concept and learn about the calculations which explain its effects. We will study is the ‘Venturi Effect’ and how a Venturimeter can be used, to understand some core fluid mechanics concepts.

A Venturimeter or current meter is used to calculate the change in flow rate through a choked tube as described by the Bernoulli equation. In industrial applications the knowledge of this effect is used to predict how a fluid will react when flowing through various stages of constricted pipes.

Venturi devices can be frequently found in:

The Venturimeter is named after Giovanni Venturi, an early 1800’s Italian physicist and scientist, whose pioneering work in fluid mechanics is still taught to this day in fluid and thermodynamic courses.

In thinking about how a Newtonian fluid flows through a system we can reason that if there is a change in the area through which the fluid flows, then there will be an associated change in flow rate. When connecting two different sized pipes there will be a ‘throat’ or a choke between them, it is at this point where we can find watch the flow rate change.

For example, if a thin pipe is connected to a large one, logic would dictate that the fluid would flow slower once it reaches the large pipe. Likewise, when a large pipe runs into a smaller one, the constant pressure from the big pipe would push the water through a thinner pipe more quickly. The Venturimeter refers specifically to a U-shaped tube which is attached to the pipe. In this device, we can see a change in pressure from the tube to the choke, specifically in the height of the liquid in the tube.

The Venturimeter is built up of three primary parts; the converging section, throat, and diverging section. As a fluid flows towards the throat, pressure will build up behind the throat, pushing the fluid through at a higher rate. In fluid dynamics, the velocity of a fluid will increase as it is passed through a constricted portions, this can be seen in the principle of mass continuity. Static pressure decreases in accordance with the principles of conservation of mechanical energy. Gains of kinetic energy throughout the system will be accrued due to a balance of velocity and pressure, as velocity increases pressure must decrease. This change in pressure can be seen in a tube attached to the piping, by comparing the levels of liquid in each side (see diagram below).

One simple way to demonstrate the ‘Venturi Effect’ is with a piece of tubing or a hose with fluid flowing through it. When you collapse part of the tube and create a ‘throat’ the flow rate at the end of the tube will increase.

Some commercial examples of this effect can be seen in aquariums, where they will use tubes with adjustable Venturi devices in order to aerate the water in the system. Other examples are fire fighting foam nozzles, protein skimmers, Carburetors or water aspirators.

In order to understand how the flow will change, we can calculate the expected changes in the flow rate. Bernoulli’s equation is used as a base to define the system. (Shown below; where p1 and p2 are the pressures, v1 and v2 are the velocity [flow rate] and p  is the density of the liquid)

A is the area of the tube the choke and v the velocity of the fluid and p is the pressure.

Using this formula by knowing area and pressure at each point, we can calculate the flow rate before and after the choke. 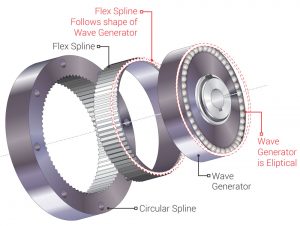